'Guinea Pigs on Trial' / 'Are You Lonesome Tonight' at Theatre Delicatessen, 10th July 2014

Edinburgh Fringe preview season is one of my favourite parts of the year.  There's nothing like watching increasingly frazzled young performers in a state of mild-to-strong freak out as August crawls ever closer.  Last night was a visit to a double-bill preview, nestled within an ex-BBC building in Marylebone - currently known as Theatre Delicatessen.  Seized spaces always send a pleasant little twinge of adventurous through me: the more dilapidated, stripped backrooms I get to see in my life the better.  But enough of my yapping, the shows:

Back in the early 2000s I was a poor student. Malnourished I tottered about in rags like a Dickensian waif, until one day a man in a white coat eyed my bony body and informed me I could get a good price for my little toe.  £12,000 to get it excised from my body, and then to have the toe stump experimented on to test bold new stump-prettifying drugs.  I was initially up for it, but then I chickened out, realising that if I got on the slippery slope of selling bits of me to the highest bidder chances are I'd end up a moderately well off torso.

As I happily wiggle the toe now I thank good sense that I didn't go through with it, but it's precisely these kinds of decisions that Sh!t Theatre's Becca and Louise are tackling in Guinea Pigs on Trial, a politico-science-comedy show about the processes of becoming a guinea pig for medical testing.  This subject matter ranges from the horrifying to the farcical, Becca and Louise painting a picture of a sinister, secretive industry that trades in the flesh of the desperate.

This is all framed through a ramshackle lecture that uses The X-Files as a framing device, encompasses a debate on the merits of Sister Act versus its sequel Sister Act 2: Back in the Habit, public urination and a quick summary of reviews of a crappy local hotel. Sure, Guinea Pigs on Trial is ragged around the edges but we quickly realise this is camouflage for the pair's burning sense of injustice.

At the core is the indignation that pharmaceutical companies exploit those in need of money with scant regard for their worth as human beings - preferring to see their guinea pigs as mere proddable, probeable, bacteria-ridden fleshbags. With an admirable willingness to get their hands dirty, the two list off the trials they've applied for, from the innocuous ("Flu Camp", which actually sounds quite nice) to the scary (getting you hooked on smack in the name of science) to the 'holy shit that's a bad idea' (injecting your bladder with botox to see what happens).  As they show us the rejection letters, listing faults like "underweight", "too much/little bacteria", "not sterilised", "not wrinkled enough" and so on, we begin to get a sense of the human body as commodity.

It's actually pretty creepy stuff: the X-Files framing device stops feeling like a quirky conceit very early on as we learn about the evasiveness of the big drug companies, behaviour which directly led to the disastrous 'Elephant Man' drug trial at Northwick Park in 2006.

This cuts to the quick of what Sh!t Theatre are trying to achieve - the charisma and comedy the sugary coating on a powerful political pill.  This brand of activist comedy really floats my boat - reminding me of the pointed stunts of Mark Thomas.  Here, as there, the laughs spring from some strange place between outrage and shock at the ambiguous flutterings behind the curtains of power.  It was ace is what I'm saying. 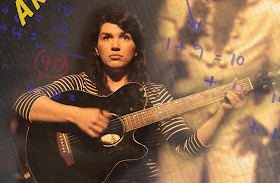 Are You Lonesome Tonight? - Ellie Stamp

Ellie Stamp is interested in identity.  Who is she? Who the hell do we think we are? Who do other people think we are?  What does the cosmos have to say about us?  Genetics? Geography?  Appearance?  By the time you've gotten to the end of this show you'll have been categorised, rearranged, interrogated, had your innermost psyche laid bare and, if you're really lucky, gotten to eat a toasted peanut butter sandwich.

The skeleton on which everything is overlaid is an exploration of Ellie's relationship to the dead King Elvis.  What if, instead of ignominiously popping it on the bog, he'd made his way to England and begun a clandestine relationship with Ellie's mum.  After all, Ellie, unlike her sister, has dark hair and if you squint the right way in the right light, why - she might even have Presley's distinctively insouciant brow and plump, smoochable lips.  The root of this train of thought was Ellie receiving a book with the unwieldy yet descriptive title  Are You Lonesome Tonight? The Untold Story of Elvis Presley's One True Love and the Child He Never Knew.

This moment is the seed of the show and everything that we experience branches from it. There's a particular focus on numerology, with everybody in the audience being asked to add up their dates of birth to get a number between 1 and 9, by which we're then sorted into groups.  Supposedly we're then to realise our similar personalities and proclivities.  For example 1s are born leaders, 4s are perceptive and 6s are warm and caring.

I think what Ellie's doing is dividing us, labelling us and telling us how we feel not differentiate ourselves from each other, but to underline our similarities.  The numerological stuff is, let's face it, a bunch of bullshit.  Somewhere inside everybody is a caring person, a perceptive person and a forceful person. The only way to get through life is to shuffle these personae like a pack of cards, deciding which face is best to pop on for any given situation.

The show that results from this train of thought is an extremely intimate archaeological excavation; a kind of auto-autopsy on why Ellie Stamp is who she is. There's a crafty loopiness to proceedings, with tangents spinning from tangents, confessions and moments of self discovery for us and her.  There's an air of truth to damn near everything Ellie says - and what's more - there's the illusion that she's realising a lot of this for the first time on stage.

I'm making this all sound unappetisingly serious so I should point out that Are You Lonesome Tonight? is also very funny.  Ellie has a bag full of jokes and a stony deadpan expression that had me cracking up throughout.  That said, the confessional sincerity shot through everything forces us to take her seriously, and we eventually arrive at a genuinely moving palce.  By the final moments, with the crowd singing along to Elvis as Ellie frantically monologues about who she is and who we think we are, she's achieved something weirdly compelling and (ironically) unclassifiable - a show lodged in the crevice between performance art, theatre and stand up comedy.

I hope this double bill does well in Edinburgh.  There were a few rough edges last night, but this meant that the material felt fresh and dynamic.  I only hope repeated performances won't dull the blade; if they can maintain this sharpness and energy they're onto a winner.

'Guinea Pigs on Trial' / 'Are You Lonesome Tonight' are at the Anatomy Lecture Theatre, Edinburgh for the entirety of the Fringe.

Tickets for Are You Lonesome Tonight? here.
londoncitynights at 3:45 PM
Share