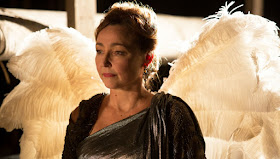 As a boy I was taken aside by the school choir teacher and gently told that it would be better that I mime rather than sing. Friends and family will attest that my vocal skills have not improved with age. So I find some sympathy in the eponymous Marguerite, a woman whose gap between her self-perceived and actual singing talent is of Grand Canyon proportions.

Loosely inspired by similarly tin-eared American soprano Florence Foster Jenkins (who is getting her own biopic starring Meryl Streep later this year), director Xavier Gianolli sets his tale in early 1920s France. This is a fractured country in recovery from the hell of the Great War, one that's beginning to question the ideals of nationalism, patriotism and calcified class structures.

We open at the country estate of the Dumonts, who're hosting a recital by the hoity-toity 'Amadeus Society' in aid of war orphans. We're led into this world by young singing talent Hazel (Christa Theret), who's ushered through a series of luxurious parlours, speckled with photographs of the lady of the house in various operatic costumes. This is Marguerite Dumont (Catherine Frot): spoken of with the utmost respect and consideration.

The crowd falls into a reverent hush as she enters the room, looking every inch the performance diva in an elaborate gown and a jaunty peacock feather head-dress. The full he orchestra strikes up behind her, launching into Mozart's notoriously difficult Queen of the Night from The Magic Flute.

She takes a deep breath and... what emerges is an utterly bizarre collection of strangled squeaks, off-key caterwauling and deformed notes. It's excruciating. The crowd collectively winces, politely suffering through their hosts demented warbling.

Yet at the back of the room, Lucien (Sylvain Dieuaide) and Kyrill (Aubert Fenoy) react somewhat differently. They're gatecrashers, eager to milk the rich for funds to launch an avant-garde art space - and they see Marguerite and her delusion as the perfect vehicle with which to expose the hypocrisies of the bourgeoisie.

The bedrock of Marguerite is a re-imagining of The Emperor's New Clothes; nobody has the guts to sit Marguerite down and candidly explain to her that she's incredibly untalented. Her husband, friends and professionals quickly realise that it's easier to support her delusion, fearing that a dose of reality might irrevocably hurt her feelings or, worse, interfere with her considerable financial bestowments. 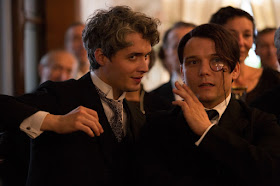 Pretty much everyone in the film exploits Marguerite's in one form or another; be it her husband who needs her title and inherited wealth to maintain his business; the young artists who use her to make a political point; the music teachers who see her as a way of paying their debts and; the general public, for whom Marguerite is a wince-inducing freakshow.

The most fascinating of the exploiters is Marguerite's taciturn manservant Madelbos (Denis Mpunga). At first he appears intensely loyal to his Mistress, indulging her fantasies by shooting and developing endless soft-porny vanity shots of her. You initially assume that he's miserably going through the motions - yet there's gradual hints that he's the one orchestrating Marguerite's surreal journey to the limelight.

Madelbos is a striking character in a film layered with umpteen layers of political and artistic meaning. While it never really trips over its own feet on these, there comes a moment where you wish Gianolli had a smidge more focus. The various threads of Dadaist philosophy, French national character, class warfare, ponderings of what objective artistic skill is and explorations of mental illness (etc etc etc) never quite coalesce into a coherent statement.

This leaves a satisfying, ornate and well-performed film, yet one that's also a bit overlong and undisciplined. Side characters like introductory ingenue Hazel or avant-garde journo Lucien wander in and out of the narrative, leaving unresolved subplots dangling forlornly in the wind. The film even ends on a enigmatic note, refusing to neatly resolve the story we've watched. I don't want to criticise the film for prioritising message over narrative (and it is tres arthouse), but I'm a bit perplexed as to what the precise message is.

Despite those grumblings, the film is anchored by Catherine Frot's sterling central performance. She's infused with cool serenity, making it all too easy to understand why nobody can bring themselves to shatter her illusions. Frot understands that though Marguerite's delusion is unrelatable, her heartbreak, fears, hopes and passions are not, making her easy to root for.

Though not half as gut-bustingly funny as was promised by the advertising, Marguerite is an interesting and enjoyable watch. Giannoli successfully allows us to both laugh at his heroine and feel sorry for her - having his cake and eating it by gently implicating us in her delusion. It's a sturdy, good-hearted piece of cinema and worth a watch.

Marguerite is on general release from 18 March.
londoncitynights at 3:28 PM
Share