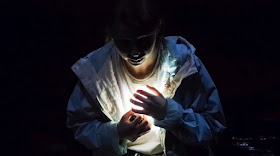 After six years of immigrant-baiting, ultra-austerity, privatisation-crazy government, Britain was already shit. But post Brexit it's like we're in an accelerated timeline of fuck.

Westminster is a writhing nest of vipers, the pound is undergoing a rapid transition to monopoly money and we're probably staring down the barrel of a decade of authoritarian Tory government with its sights set on dismantling the BBC, the NHS and any part of the public sector that dares stick its head above the parapet.

You just want to throw your hands up in despair and cry to the heavens. How could things possibly can get worse? Enter playwright Tess Berry-Hart...

Set entirely within a shipping crate on a cross-channel voyage, her play Cargo imagines a nightmarish future Britain. Central to the story is the clever inversion of the current refugee crisis: in Cargo people are desperately trying to escape a collapsing Britain for sanctuary and security in Europe. It's a fantastic core idea for a play, empathising with those seeking a better life and encouraging us to identify directly with their struggle.

At the core of the story are Joey (Milly Thomas) and her little brother Iz (Jack Gouldbourne). We hear them first, whispering in pitch darkness as they worry about being discovered. To their surprise they quickly learn that they're not alone. Sarah (Debbie Korley) reveals herself as a traumatised and paranoid presence, brandishing a switchblade and ordering them to shut the hell up. Eventually, from within a packing crate, Kayffe (John Schwab) reveals himself. He quickly defines himself as not to be trusted, sending the interpersonal web within the crate into a violent tailspin.

As the characters jockey for control of the situation we learn about the calamities that've befallen the world world. Piecing together this jigsaw of misery is part of what makes Cargo so engaging, so I will refrain from too many spoilers, but I will say that it presents a scarily plausible dystopia. Like all the best science fiction, Cargo understands contemporary issues like immigration, religious fundamentalism, xenophobia, and human trafficking and takes them to logical, horrible conclusions.

The situation Cargo presents is a nightmare, but on top of that is ladled an exceptionally intense claustrophobia. Staged in the round, we're in close proximity to the action at all times, able to see every drop of sweat, panicked grimace and flicker of emotion on the character's faces. This, combined with insanely effective lighting design that plunges us into darkness at frequent intervals, makes for a gripping and uncomfortable 80 minutes.

Further amping up the dramatic potency are four excellent performances. Each of these characters is damaged in their own way and each conceals secrets that're gradually winkled out of them. Highlights are Milly Thomas' Joey, whose familial protectiveness curdles into something disturbing. Joey, we think, has her head screwed on straight - Thomas ably conveying the ways her character puzzles out and tries to control the situation. She's best when things are fast unravelling in the closing moments of the play: Thomas capturing a complexity in her reaction that belies her acting skills. 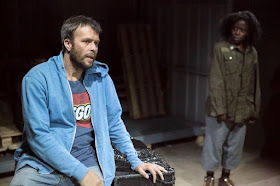 All this makes Cargo one of the most suffocating, intense nights at the theatre I've had in ages. Making our simulated suffering bearable is the knowledge that there are sons, daughters, brothers, sisters, fathers and mothers living through this torture right now; sexually abused by people traffickers, escaping bombed-out homes, persecuted by crazed religious fundamentalists and facing incarceration without rights in squalid detention centres.

Most people - even those that profess care - merely cluck their tongues and murmur about how awful these things must be. But, deep in the back of the mind, lies the Western sense of superiority. After all, these people clinging to rickety boats and drowning in the Atlantic just aren't like us: our politicians dehumanise them as 'swarms' of people, our commentators describe them as 'cockroaches'.

Cargo cements the old maxim: there but for the grace of god go I. On leaving the theatre I felt sick with guilt and feeling an ominous sensation that the shitty future it presents may be the one awaiting us. It's an outstanding play, coming in the absolute perfect political and social climate for it. I see a lot of plays that comment on contemporary politics, but rarely (if ever) as incisively and effectively as this.  I can't recommend it enough and it gets a very rare five stars.

Cargo is at the Arcola Theatre until 6 August. Tickets here.