Henry Cyril Paget, the 5th Marquess of Anglesey, was pretty damn rock and roll for a Victorian peer. Born into incredible wealth and privilege, he blew it all on outrageous outfits, mountains of jewellery and ill-advised theatrical extravaganzas - becoming known for his "sinuous, sexy, snake-like dances". He died penniless in Monte Carlo at 29, having drained the family fortune.

Outraged by his behaviour and reputation, the surviving Pagets conspired to erase the 5th Marquess from history, burning his papers, any photographs of him and generally airbrushing over his existence. The only monuments to his memory are some faded (and fabulous) photos that escaped the incinerator, a questionable tell-all interview with The Daily Mail and a summary of his life from the Complete Peerage that concludes:

"[The 5th Marquess] seems only to have existed for the purpose of giving a melancholy and unneeded illustration of the truth that a man with the finest prospects, may, by the wildest folly and extravagance, as Sir Thomas Browne says, 'foully miscarry in the advantage of humanity, play away an uniterable life, and have lived in vain.'"

Now that is a goddamn memorable memorial.

And so to How to Win Against History, a jaunty little musical biopic that attempts to explain that, despite dying in ignominy and being  airbrushed from public knowledge, that the Marquess actually came out on top after all. In a way.

We follow Paget, played by writer and composer Seiriol Davies, as he progresses through the rigid class militarism of Eton, into the world of experimental theatre and then makes a beeline for death "of some lung thing". Accompanied by his manager/co-performer Alexander Keith (Matthew Blake) and Dylan Towney's keyboard, the trio approach history with playful irony, the relatively minimal stagecraft making sure things bounce along in a decent rhythm.

The obvious centrepiece is Davies' Paget. He approaches him as a naifish and innocent, convinced that he is outrageously talented yet completely unable to understand what audiences 'want' to see. Davies makes Paget easy to like: his performance a cocktail of one part pleasant Father Dougal-ish idiocy, one part delusional grandiosity served with a twist of concentrated camp. At times his wide-eyed enthusiasm and utter refusal to engage with reality gives him a touch of otherworldliness, making him feel like an angel gradually corrupted by exposure to cruel reality. 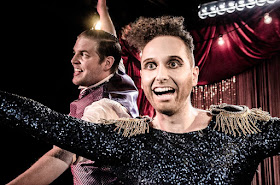 He's aided by a bevvy of tunes that allow the Marquess to fully emerge from his chrysalis. These performances reminded me of openly gay 70s popstar Jobraith, both eccentric performers out-of-step with the societal norms and both tragically dying young. There's a real punch to the music as Paget lets his freak flag fly - the slightly awkward young aristocrat unfurling his feathers like a peacock and giving in to his desire to shine and shimmer.

Thing is, though the Marquess is marvellously fabulous, he remains a cypher throughout. Granted, his erasure from history doesn't leave much to build a character upon, but by the time the curtain falls we feel more like we've seen a caricature rather than a human being beneath, and, subsequently, we never quite feel that we understand him. There's a bluntness to the character, and I'd have loved just a little self-reflection from him.

But perhaps there just isn't that much to understand about Paget - perhaps he is really was just a clueless popinjay who came a cropper at the hands of debtors. Is it more useful to view him as a precursor of camp culture, a man confident enough to cross-dress in public, strut around with a dyed poodle and modify his car to spray perfume from the exhaust? Here we find a more substantial morsel to chew on - a reflection on  how the rigidly stratified Victorian aristocracy could produce a creature as curious and rare as Paget.

How to Win Against History is undeniably entertaining; the songs bounce, it's funny as hell, the costumes rock and the performers are enjoying themselves as much as the audience. Still, it's one of those shows that sends you running off to Wikipedia - frothy and slightly shallow one - but deeply enjoyable show.


How to Win Against History is at Ovalhouse until 23 July, then heading to Edinburgh. Tickets here.
londoncitynights at 3:01 PM
Share