The less said about the farcical Labour leadership coup the better.

This is just one example of the current climate of grasping, fevered ambition, making for the perfect time to stage Macbeth. Shakespeare's parable about power, morality and guilt has and will never be irrelevant, but right now its blade feels that much keener and hungrier for blood. After all, perhaps those scrabbling for a seat at the top table sense that time is running out.

The Prowl Theatre Company stage their Macbeth inside a black box upstairs in the Courtyard Theatre. In the summer heat it's a stygian, sweaty and claustrophobic environment, the square single-rowed seating practically forcing the audience into the action.

Darkness gives way to a spotlight that illuminates the three witches huddled in the corner. In a chorus of half-giggles and incoherent muttering they chalk out a pentagram on the floor and launch into their disconcerting pagan poetry. From then we're into a whipcrack quick 70 minute Macbeth. As the central couple descend into murderous realpolitik, the bodies hit the floor with increasing regularity until the curtain falls.

There's a lot to praise here, most obviously striking being Helen Kösem, Greta Wray and Bethan Johns' fantastic witches. All credit to Prowl Theatre, their Weird Sisters are about as weird as I've seen in any production. Wild of hair, with kohl smeared around the eyes and sporting dementedly twisted expressions, they spend their time on stage writhing around on the floor, enjoyably cackling their way through the dialogue and later mocking an amusingly miffed Macbeth. 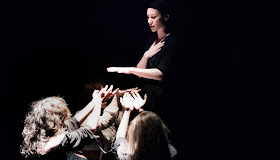 Also of note is Joe Stuckey's excellent Banquo. Now Banquo, whose big character moment is sitting still and not saying anything, isn't the trickiest character in the Shakespeare canon. Yet Stuckey, who sits amongst the audience in the feast scene, brings a wonderful, sardonic quality to the role. Once dead, he behaves like a character who's read ahead a few pages in the script, confidently knowing that bloody retribution for his murder is just a couple of scenes ahead.

Sadly, Tom Durant-Pritchard and Sophie Spreadbury's central duo don't fare quite as well. Durant-Pritchard (also directing) certainly looks the part, and is helped by effective lighting that accentuates the gloominess of his features. Still, there's little sense that his decisions weigh heavily upon him and the subtle corruption that marks a great Macbeth isn't quite there. Spreadbury fares a little better with Lady Macbeth, her rendition of "out, damn spot" appropriately chilling. Still, she and Durant-Pritchard both suffer from the abbreviated runtime, their gradual descent into villainy told in vignettes rather than the gradients it needs a real emotional kick.

Squeezing this much Shakespeare into such a small space is worthy of praise - but the characters, if not the themes, suffer from the compression. Still, it's a production with an clear sense of its own aesthetics; strongly and striking lit; using alarmingly realistic-looking kitchen knives in place of swords; and knowing precisely when to deploy a bucket of the red stuff.

Macbeth is at the Courtyard Theatre until August 27th. Tickets here.
londoncitynights at 11:46 AM
Share