Circa's new performance Peepshow is simultaneously modern and retro. On one hand, it's contemporary as hell: a show rippling with sexual tension to a pounding minimalist techno soundtrack. On the other it could be something you'd have seen in Weimar Berlin, self-consciously 'cheeky' acrobatic stripteases set to upbeat jazz.

This cocktail of old and new adds up to a pretty damn enjoyable hour of circus - a fresh jaw-dropping and gasp-inducing feat of skill, agility and strength reliably offered up about every three minutes or so.

The seven-strong cast (Ela Bartilmo, Jessica Connell, Jarred Dewey, Scott Grove, Luke Thomas, David Trappes and Billie Wilson-Coffey) each have their own speciality, ranging from Scott Grove, whose musculature strains like the rigging of a battleship, to the light as a feather  Ela Bartilmo, who's filled with an nervous electric energy that sends her jittering across the stage. 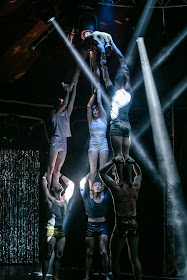 One of the things that makes reviewing circus so tricky is that the baseline of skill for even an average night of acrobatics is so high. It's easy to get a bit blase about people doing something as (relatively) straightforward as standing on each other's shoulders or weightlessly tumbling across the floor, forgetting the years of perspiration and dedication it took them to reach this point. But, sat in the front row, the performers often appearing in danger of careening into the audience and being perilously swung right over my head, you get a fantastic sense of their raw physical power and finesse.

It ends up distilled into an extraordinarily sexy hour of entertainment. Perhaps that's a bit obvious for something called Peepshow, but you'd be surprised how many circus and acrobatic performances do their best to pretend that super-fit men and women in skintight outfits writhing around on one another isn't sexy as hell. 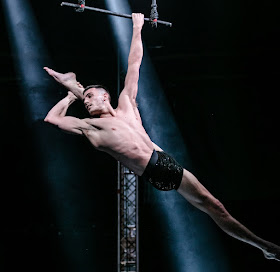 You know what? Jarred Dewey is so impressive in this show that he deserves his own paragraph. That's not to say that anyone else in the company isn't great, but he's got some intangible star quality that makes his solo performances magnetic. When he writhes about up in the air he looks inhumanly serpentine - like something you'd expect to see in an X-Men movie than on stage in front of your eyes. I'm like, not un-fit, but I'm vaguely in awe of the guy and seeing him made me make a mental promise to lift heavier weights more frequently and do a bit of yoga.

The only real low points are the hoop and juggling acts - criticisms I admit are entirely subjective on my part. I've seen a thousand hula-hoop acts over the years and they all seem fairly similar to one another. The one moment where the hoop performances become interesting is when one comes apart and swishes across the stage like a big plastic whip, having to be quickly exchanged for a more structurally sound hoop. And the juggling? Well, it's juggling. The most interesting part was when a dropped ball rolled over to me and I threw it back up onto the stage.

Wobbles aside, Peepshow is a supremely confident hour of circus that achieves its goals with style and ease. The performers manage to be both superhumanly talented and approachably charismatic. It sounds good, it looks great and you can sense the blood, sweat and tears that have been shed to make this all look so effortless.

Circa: Peepshow is at the Underbelly on the South Bank until August 27th. Tickets here.
londoncitynights at 12:08 PM
Share