Over the years I've experienced Jules Vernes' classic Around the World In Eighty Days in a variety of forms. I've seen it told with Fogg as an anthropomorphic lion, as a bad Jackie Chan / Steve Coogan buddy movie, and as an amazing choose-your-own-adventure videogame. Hell, I've even eaten my way through it courtesy of the delicious Phileas Fogg brand of tortilla chips (FYI, I will happily accept a box of snacks for this plug).

And, as of yesterday, I've now run and puzzled my way through the journey. 80 Days - A Real World Adventure is the latest from Fire Hazard Games, who specialise in 'high energy street games', a form of immersive theatre with gaming elements.

From the press release, I'd gathered the show involved traversing London and solving clues: enough to get me excited. But even after multiple emails from the company I still turned up with very little idea of what I'd actually be doing. So, as simply as I can put it without spoiling things, this is what 80 Days actually is:

Working in teams, you have 80 minutes to solve a series of clues based around locations in the Covent Garden/Strand/Charing Cross area. For example, you will be given a riddle that references a specific place, and you must go there and scour the exterior for the answer. Solving these riddles gives you (virtual) cash. You must use that cash to complete a shopping list of items you'll need for your journey around the world. 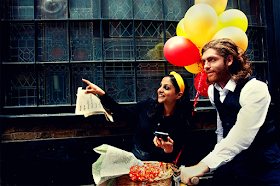 This is all done via a web page that you access via your smartphone. It provides the clues, banks your money and grants you access to the shops. Once you have completed your shopping list, you must return to the starting location in order to see how your purchases inform your trip around the world.

It's easy enough to pick up, though a little confusingly explained by actors in character as Victorian eccentrics who profess not know what a smartphone is. Mercifully for a show so built around technology, it all works without a hitch with only a wobbly data signal having the potential to trip teams up. I would advise you make sure your phones are fully charged before beginning though.

Fire Hazard's promotional pictures show smiling teams dashing through alleys clutching maps - a depiction that proved 100% accurate. I had brought a friend along, and we spent pretty much the entire time sprinting around the busy streets, eager to score as many valuables as we could, the time limit cranking up our competitive natures.

But I can't impress enough how active this show is. I'd advise groups to turn up in trainers and be prepared to dash about (an ability to dodge and weave through crowds is also a bonus). If you have mobility problems, then this show might not be much fun (the time limit discourages taking breaks) and it would be a miserable experience for anyone in bad weather. But for me it was one of the most enjoyable workouts I've had in a long time - the pint I got with my drinks token at the finishing line went down a treat.

Sadly, despite arriving back with a full shopping list and time to spare, my team didn't win. However, now that I know the rules I'm sorely tempted to give it another go and try to improve my time. Being able to play it again (presumably with new clues) is a testament to how much effort has been poured into 80 Days. I had a great time - sign me up for whatever Fire Hazard are serving next.

80 Days - A Real World Adventure is at Underbelly until 29th September. Tickets here.