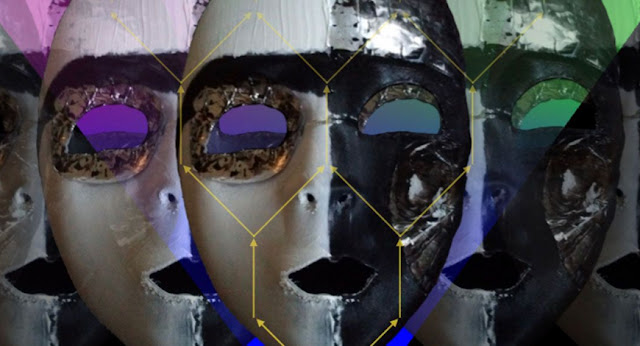 Virtually Opera's We Sing/I Sang bills itself as "an improvised sci-fi ritual opera". A hazily defined 'Crisis' has hit the humanity and the old world has been erased. From the ashes a new collective consciousness - Mind - has formed. Now Mind is leaving this ruined planet behind and making tracks for the stars. The lessons, thoughts and memories we take to the new reality are up to us.

Part of the Cockpit Theatre's Tête à Tête: The Opera Festival, We Sing/I Sang's Crisis is clearly heavily informed by COVID-19. I suspect this topic is going to be the case for a lot of fringe art for a while yet. The country's playwrights and performers have been deprived of an audience for far too long and are no doubt bristling to translate their experiences into plays, poems and songs.

We Sing/I Sang is an austere experience, which I guess is as much a socially distanced necessity as an artistic choice. On a largely empty stage, CN Lester improvises an opera from our prompts accompanied by a viola soundtrack from Hannah Gardiner. They stand at the rear of the stage, with the performance space occupied by Leo Doulton's masked androgynous dancer.

A lot of artists are clearly blue-balled (and blue-ovaried) after spending so long being unable to express themselves live and Virtually Opera recognise that the audience will feel that way too. As such, our thoughts shape the show as we answer questions on our phones that are projected above the performers.

We're asked "What group of people tried to take advantage of the Crisis?", "You have a memory that brought you solace during the Crisis. Who was in it?" or "What unusual ability did some people develop during the Crisis?" Our responses (and some general plot direction from 'adjudicators') shape the plot.

I replied "Conversation with bees" to the last question and watched as Lester worked their way through a verse about how, in the wake of the apocalypse, they realised that they could comprehend the faint buzzing all around them. I'm always impressed by quick-thinking improvisational skills and there's a smattering of resonant lyrical moments throughout the show.

Anyone improvising free-form opera has the benefit of being able to vamp for a few bars while they think of what they're going to sing next, but it's still fun to watch. Plus I figure that Lester (or someone backstage) is choosing what suggestions to base the show around so as not to break the atmosphere. 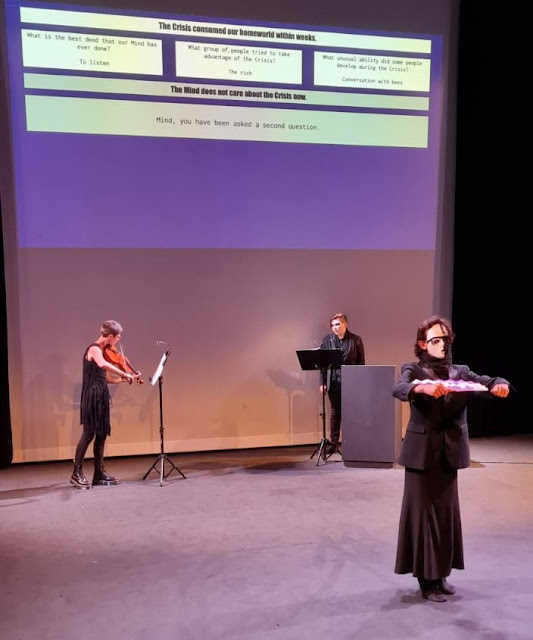 By and large, this succeeds in what it sets out to do and was a meditative reentry to performance after a long hiatus. The simplicity and straightforwardness of the show make it something that theoretically could be staged once society has actually collapsed. I mean, humanity would have to be completely on the ropes before we couldn't cobble together a singer, a single instrument and a dancer.

Being encouraged to be introspective about our own experiences during lockdown was also surprisingly touching. We're often casually asked how we are, but it just wouldn't be British to respond in any way other than "...fine". Getting quizzed on specific questions on your mood, memories and thoughts felt pleasantly therapeutic. And after months of staring at the walls of my cramped house I'll take whatever emotional probing is on offer.

I have a couple of criticisms. The show's IT set-up isn't great, consisting of switching between a webpage and a Google Spreadsheet. You have a limited time to enter your answers and I had to close my browser down in order to make new links appear. It just about works, though I can see less tech-savvy audience members getting frustrated as there's not much guidance in how to interact with the show once it's begun.

Also, Leo Doulton's dancing fills space but doesn't add anything interesting to the performance. He's something to look at during the singing rather than an integral part of the show and I couldn't connect his costume and choreography with Lester's singing and Gardiner's music. That's not to say I wish he wasn't there, just that all three performers should interact a bit more.

Quibbles aside, We Sing/I Sang is a great show for our mid-apocalyptic times. I'm a sucker for interactive elements in theatre and weaving them into opera kept me engaged throughout the show's concise 35-40 minute runtime.

It sounds like damning with faint praise that I was simply happy to be somewhere else at night other than my sofa, but this was great food to break a long theatrical fast with.

'We Sing/I Sang' is being broadcast online as part of the Cockpit Theatre's Tête à Tête: The Opera Festival on 17 September. Information here.