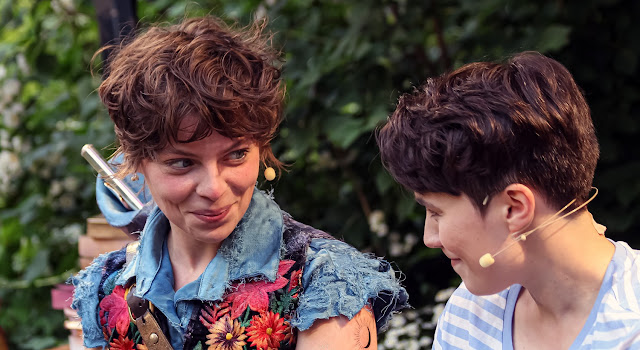 We're not out of the woods with COVID but at least we seem to be on the right path. The pandemic has been the biggest global event since World War II and we'll be feeling its consequences for years to come. And, as playwrights emerge from lockdown isolation, it's inevitable that many of them will try to process what's happened on stage.

We begin just as lockdown starts: Freya is figuring out what to study for her A-levels, bristling against her family, and pining over her classmate Ollie. Enter Mab, who has a brief and flighty conversation with Freya, with the fairy surprised when she remembers their encounter the next day. The two form an unlikely friendship, though Mab warns that things don't end well when immortals get entangled in the human world.

What follows is a gentle and emotional drama about life under lockdown, complete with fantastical story elements that suggest Pearson has read her fair share of Neil Gaiman.

One thing that struck me during the pandemic and that this show underlines is the tragedy of time slowly trickling away. We will never get those dreary lockdown months back and if that lost time makes a thirtysomething theatre critic melancholy it must be excruciating for teenagers.

You can only ever be young once and people like Freya can rightly grieve for those delayed first kisses, the wild parties that didn't happen, and the thousands of missed opportunities to figure out who the hell you even are.

Pearson offsets the breakneck speed of adolescence against Mab's immortality. For her this is simply another plague humanity must endure. But even though she floats above physical concerns, she senses how humanity's fears, ambitions, and outlook have been warped by the gravitational pull of COVID. Relationships have disintegrated under the pressure, finances have collapsed, and uh, there's all those corpses who'd otherwise be alive and well.

This is condensed into Freya's household, depicted as a microcosm of the British COVID experience. Watching it in a play gives us the opportunity to observe it externally and nudges us towards a Mab's eye view of the situation. This is  underlined by Georgie Staight's solid direction - particularly having Mab move through the audience and occasionally silently watch Freya just outside the rope marking out the performance space.

Both actors nail this and are obviously relishing being in front of an audience. Best of all, their friendship feels realistic: clearing the performance hurdle of why Mab would be interested in Freya in the first place.

Flint nicely combines Mab's haughtiness with vulnerability, resulting in a character that feels otherworldly but that's still relatable. She also nails the lyrical dialogue, which echoes Shakespeare without descending into pastiche.

Patmore also impresses, especially in a serenade that's a reminder of the beauty of live music. Her Freya is sincere, incisive, and resists authority - Patmore makes it easy to see why Mab keeps coming back. Perhaps the best example is that at the end of this quick n' breezy 70-minute play I was genuinely touched by the reveal of her self-portrait.

Queen Mab isn't close to making definitive pronouncements on the pandemic, but as a snapshot of a mood it's bang on. I'd worried that we'd get a deluge of plays about the pandemic as theatres (am craving escapism right now) but if they're as good as this bring it on.