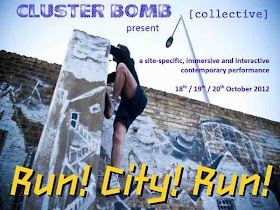 Hackney Wick often feels like one big open air gallery.  Every time I go there the walls have had a new lick of brightly coloured paint.  The area revels in its cultural ‘outsider’ status, which feels appropriate enough given that it's a bit of an geographical outsider. Saturday night was a wet one and unlike some places in London, rain does not particularly romanticise Hackney Wick.  The run-down buildings grow more desolate, the open spaces lose some of their reclaimable charm and the cold streets empty.

It was to this environment that I stepped off the number 26 bus and made my way to ‘Run ! City! Run!’, a performance art event by Cluster Bomb [collective].  As far as I can tell they're incestuously* linked to ‘[performance s p a c e]’ (review of the last event of theirs I attended here), sharing the same space and some members while, as far as I can tell, not explicitly being a part of it.

As I approached the meeting point I began to see people in ponchos hanging out on street corners holding mini-megaphones.  They were dotted up and down the street, and seemed to be communicating with each other at distance, like beacons in the night, or a long distance version of Chinese whispers.  For people that were standing out on a very miserable night they were in suspiciously good spirits.  Rounding the corner to the event I saw a huddled mass of umbrellas on a raised patch of concrete just outside the workshop.

Sebastian Hau-Walker ran up to us brimming with enthusiasm, mini-megaphone in hand and asked us to introduce ourselves to the crowd.  I have to admit at this point I was a little sceptical of what was to happen and a tiny bit grumpy.  I’d spent much of the day marching around the streets of London in fruitless support of trade unionism.  I was tired, and not even the enormous can of energy drink I’d guzzled on the bus here was bolstering my spirits.  Earlier, thoughts had flitted through my brain of just sacking the whole thing off and hiding under a duvet on the sofa at home.  I only vaguely knew what the performance was going to be, but I half suspected it was going to be physically strenuous for both the artists AND the audience.  This energetic enthusiasm then, while obviously sincere, worried me a bit.

I shouldn’t have been so miserable, and I quickly learned to count my blessings.  I was wrapped up warm under an umbrella, while the performers were running around in skimy athletic gear, writhing through puddles and patches of wet grass.  In the face of steel-jawed commitment like that, it’s impossible to stay grumpy for long.

As an audience we began as a huddled group, standing bunched together while the artists ran around us, megaphones in hand, distorted feedback and voices burbling up from each one.  It was disorientating and felt vaguely dangerous, the performers sprinted past us, seemingly not taking much care to avoid us in the slightest.  Being circled like this is an odd sensation, I’m used seeing performances in the round, but it’s far rarer to be a member of the audience surrounded on all sides.  I began to feel a bit like a buffalo must feel when circled by a pack of wolves.  Instinctively I wanted to press into the middle of the herd, both so as to not get bashed into by one of the runners, and also to not be a cause of them tripping over and lying in a wet, injured heap on the ground.

This uneasy mood continued through much of the next sequence, when one of the performers began aggressively confronting the audience and questioning their right to “be here”.  She was speaking to us, but also at the same time indirectly addressing the rest of the performers, who were slowly climbing over the wall behind her.  All of this serves to unnerve the crowd.  Whoever it was doing this questioning did a damn good job of it.  It’s difficult to be suitably authoritative when you’re being rained on and wearing soaking wet athletics gear, but she managed it magnificently.  This demanding of credentials strongly reminded me of videos I’d seen of the reactions of guards to people attempting to film the Olympics site before the games.    Throughout the outdoor sequences of the performance the red-lit tip of Anish Kapoor’s ‘Orbit’ was ominously visible, just over the top of the wall.  The performers were even at one point wearing the same type of hi-vis jackets as the Olympic guards.

As we were being hectored, everyone else involved in the show was busy carefully climbing down what must have been a wet and slippery wall.  The thing was about 10ft high, so this looks pretty damn dangerous.  The performers look like they know what they’re doing though, and as this was the last performance I guess they’ve done this quite a few times before already.  Even so, I worried that the performance was going to be radically altered by the thwack of skull on concrete.  They seemed to anticipate this reaction, and as the performers dangled and dropped from their cubbyholes they fell into a limp, writhing pile on the ground.

This slithering, wet pile of artists moved slowly towards us, clutching their heads in what could have either been pain or ecstasy.  I had to admire their commitment as they dragged themselves over the wet bricks, managing to neatly avoid the megaphones on the ground, which were still sending out waves of weird, distorted sound.  The performers eventually bunched together, and in slow motion stood up and raised their arms to the heavens.  Is this some kind of mimed religious fervour?  Their mud spattered and soaked clothes put me in mind of religious pilgrims: wide-eyed flagellators whipping their sins away.

Next they moved through the crowd, lining up against a wall – before picking up a pile of bricks, and assembling them into small piles.  This neatly linked to the next part of the performance when we moved inside the warehouse.  Here we see a pile of bricks in the centre of the room, under a dim light.  The performers climb the tower, which looks vaguely unsteady.  As they all balance on top, the thing wobbles, bricks cascade down the sides.

The performers stay balanced somehow, and then the sounds of ‘Born Free’ are heard coming from an amp hidden inside the bricks.  Sebastian stands alone atop the pile, singing happily and clearly.  Considering the rest of the performance has been overtly abstract, confusing behaviour this feels very surreal, while also being funny.  It reminds me of Dean Stockwell singing 'In Dreams' in ‘Blue Velvet’.  It’s also nice to have it demonstrated these are not particularly po-faced artists. They don't expect you to react to every little thing they do with intense solemn seriousness.  Frankly you’d have to have had a sense of humourectomy not to occasionally find some of this sort of stuff a bit silly at times.

To round off the night, a projector is turned on showing (I think) a map of cloud formations projected onto a sheet, while a woman solemnly warns us of impending bad weather.  Eventually, we’re gently moved on from here, and as we enter a café area where we're served beer and tea by a rather offputtingly vinegar faced man.  The piece is over.

There's so much going on here that it’s difficult to work out what thread I’m supposed to be following.  What happens at the beginning seemed to bear little or no relation to what happens in the final stages.  It’s difficult to tell whether this is a symptom of an equality  of ideas between the members of Cluster Bomb, or simply that someone has so many ideas that seem relevant now that they want to perform them as soon as possible.

I liked a lot about this performance.  I’ve got a particular appreciation for people that really throw themselves into something.  Spending your night outside in the cold, pouring rain shows a level of commitment that makes you sense the philosophies and aesthetics presented are passionately felt among the group.  There was a unity of purpose that’s refreshing, and it’s clear that whatever this all means, they’re totally on board with it. I find the performance quite hard to imagine without rain beating down throughout and it seems like a nice bit of cosmic luck that they get to perform under such miserable weather.  The rain grounds the performance, preventing it feeling sterile or overly considered.  It adds a chaotic element to what we’re seeing, while at the same time upping the danger to the performers.  This wet weather is seemingly directly addressed in the final “Forecast” sequence, where we’re ushered away from impending disaster.  It’s more than a little ironic that after quite a while actually standing in bad weather, that we’re warned of a possible, conceptual storm to come only when we're safely inside.

The choice of area where all this takes place is feels very appropriate.  It’s the ghost of a building, a brick skeleton.  The use of bricks throughout the performance is interesting.  I saw them as a symbol of creation and destruction, both yield interesting results.  When we see the performers building their miniature megaliths out of discarded bricks, they’re engaging in microscopic form what they’re doing in macroscopic form by repurposing the urban space.  When we move inside the building, and find the heap of bricks it’s lit grimly, like a gravestone.  I’d initially assumed that this was going to be a downbeat ending; ‘no matter what, everything falls apart in the end’.  When it’s then revealed that there’s music emanating from inside the rubble I reconsidered, and decided that what was trying to be said was something along the lines of ‘the fate of destruction is also the joy of rebirth’. 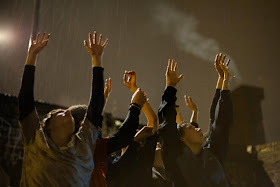 I’m fully aware that this review is in intense danger of collapsing into a big pile of pretentious waffle, and this leads into my criticism of the piece.  ‘Run! City! Run!’ is obviously about something, and at times I felt I was tantalisingly close to figuring out what it was.  It’s like a puzzlebox, where fully decoding the symbolism of one aspect might unlock the rest of it.  But I couldn’t, and when I attempt to work out an over-arching theme I come up short.

Writing about this I get a nagging sensation that I’m seeing patterns where there aren’t any.  Am I trying to impose some order or narrative on a piece that’s purposefully obtuse?  I enjoyed ‘Run! City! Run!’, and it more than achieves what I consider success in performance art; namely to open the viewer’s mind to a fresh perspective, or to outline a previously unconsidered link between seemingly unrelated things.  Despite this, even though it was never anything less than fun to watch I’m left with an annoying itch that I can’t quite scratch.