The late 1970s and early 1980s were a golden age for British TV science fiction. Tom Baker was deep into his tenure on Doctor Who, while shows like Quatermass, Blake's 7 and Space: 1999 were cementing themselves in popular culture. What they lacked in budget they made up for with ideas, building passionate fanbases that persist to this day. But there's one show you won't have heard of: Dark Sublime.

It tells the tale of Captain Vykar and plucky crew of the space Skelder, who seek to prevent villainous interdimensional space queen Ragana from breaking through to our universe. All she needs is the Shadow Ruby and we will be doomed to slavery under her sadistic rule.

But that's not what Dark Sublime is about. Set in the present day, we follow Marianne (Marina Sirtis), who played Ragana. It's now been 35 years since Dark Sublime aired and for her, the show is a hazy memory amidst many other roles. That all changes when Oli (Kwaku Mills) enters her life.

He's a cult TV superfan, having latched on to some grainy bootleg DVDs of the show and discovered something wonderful. He's on a campaign to bring the show back into the public eye, campaigning for a re-release and organising the inaugural Dark Sublime fan convention, at which Marianne will be the star attraction.

Though Marianne is appreciative of Oli's attention, his adulation makes her feel vaguely fraudulent. She simply cannot understand what they are seeing in a silly and dated show that was just another job for her. 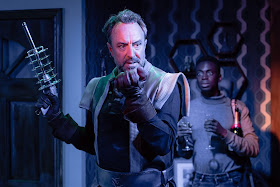 Bubbling away in the background (and often in the foreground) is Marianne's relationship with Kate (Jacqueline King). The pair have previously been romantically entangled, though that has runs its course. Now they've settled into a close friendship, though there's still a lingering (and unreciprocated) desire. Anyway, Kate is now in a new relationship with Suzanne (Sophie Ward) and life has moved on.

Writer Michael Dennis (making his debut) has found a decent seam of drama in the world of cult TV fandom, conventions and actors living off their past roles. Most fan conventions any contain rows of desks populated by washed-up actors who once appeared in cult shows and a pile of glossy headshots ready to be signed. What does the man who once played Stormtrooper #14  really think of the people who turn up at his desk?

Casting Marina Sirtis as the lead makes this material fizz. She played Betazoid empath Deanna Troi on Star Trek: The Next Generation, which means she has first-hand experience with dealing with fans at conventions and knows what it's like to be best known for a role she hasn't played in years. Sirtis' experience in dealing with fans shows in her performance, it's easy to surmise that Marianne isn't a million miles away from Sirtis herself.

Dark Sublime is at its best when it's getting under Marianne's skin and exploring her lopsided friendship with Oli. Unfortunately, the play also deals with a tonne of other, much less interesting stuff. For example, there's an interminable scene in which side characters Kate and Suzanne lie on the grass outside Alexandra Palace and idly chat about their jobs.

It means that large portions of the play are, to be brutally honest, very boring. This is particularly evident in the first act, in which the characters and their relationships are established at a glacial pace. By contrast, the second act starts with an energetic bang, with Oli excitedly introducing his convention and what we can expect. 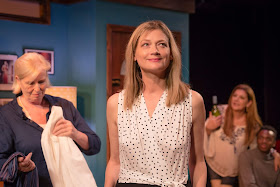 This going to sound extreme, Dark Sublime would improve by leaps and bounds if the entire first act was cut. The fan convention is where the show's themes are strongest, it's where we get to meet big personalities, it's where the funniest gags happen and where there is genuine tension between the fans and the stars. By comparison, much of the first act is people sitting around in a living room having circular, meandering conversations studded with mediocre jokes.

All that's a pity, because Dark Sublime has clearly had a lot of love poured into it. The programme cover is a beautifully designed rendition of The Dark Sublime Annual 1982, and the interior contains tie-in books featuring the cast and TV Times cover stories (all by the obviously talented Clayton Hickman). The general design of the show is also pretty spiffy too - even though I didn't think much of the show I considered buying a t-shirt just because the logo was so cool.

Plus I can't pick any holes in the cast. Sirtis is great, but Kwaku Mills sometimes seems on a one-man mission to entertain us, and pretty much every moment Oli is on stage he's doing something interesting. Also great is Simon Thorp's brief appearances as Vykar, in which he neatly skewers the Shakespearian actor 'lowering' himself to run around with a toy raygun.

It's frustrating that Dark Sublime contains all these objectively great elements, as they end up diluted by so much unnecessary material that even they get washed away in a wave of ennui.

Review is of the 27th June preview rather than the 28th June press night.