I've been a fan of Nell Hardy for some time. Way back in 2016 I saw her in the title role of Pandemonium Performance's promenade production of Alice in Wonderland in Abney Park Cemetary. She blew my socks off and since then I've tried to see her in as much as possible, as whatever 'it' is, she's got it.

So when I was invited to a stream of her one-woman monologue, NoMad there was no way I was passing it up. I'm not sure what I was expecting from Hardy, but a blistering and brutally honest monologue about her own experiences with homelessness, institutionalisation and mental health wasn't it.

Over the course of an hour and a bit, Hardy guides us through the nightmare of processed through a juddering and underfunded social care system intentionally designed to grind those caught in it to dust. NoMad focuses on mental health treatment, making it sound like a sadistic game of snakes and ladders, albeit one with loaded dice, too many snakes and maybe one creaky ladder. But hey, at least being an inpatient means you get food, heat and a bed...

The most vivid and well-realised moments come when Hardy is explaining the physical effects of homelessness. There's the misery of getting rained on: cold and wet clothes freezing you down to the bone and no prospect of getting properly dry anytime soon; the crinkle of an unwashed, overworn sock inside a shoe that hasn't been taken off in days and a vivid recounting of how it feels to have to piss and shit outdoors.

It's in that last one that Hardy achieves something of the sublime. Much of NoMad is about a sustained assault on her sense of self and the destruction of her ego. Here, in what passes for one of the more light-hearted sequences of the show, she compares herself to a dog - both of them having a piss out in the open. It feels entirely apt, a nice summation of how homelessness erodes away human specialness as divine creatures and reduces you to a deterministic biological machine. 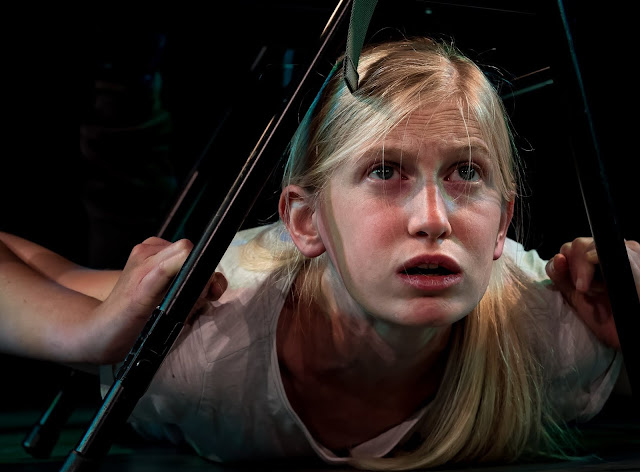 I went into NoMad with respect for Hardy as an actor - and left with a mild sense of awe her writing skills. Prior to this, I'd assumed she was just 'yer typical talented drama school graduate making her way through London fringe theatre scene - but there's admirable sense of purpose and precision in this writing that you simply don't encounter that often.

Plus, while the text is light on explicitly referencing politics, it's difficult to read it as anything other than a condemnation of austerity. Though it might not be mentioned by name, the degradation of care systems, the suffering baked into benefits applications and the ease with which it's possible to fall through the cracks into homelessness are all symptoms of the economic snake oil that's killed hundreds of thousands and inflicted unnecessary pain on millions more.

I'm not saying loading every Conservative politician into some kind of gigantic rocket and firing it into the heart of the sun would have actually solved any of Hardy's problems, but it certainly couldn't hurt to try.

The only flaws of note here are technical. With COVID having effectively shut down fringe theatre I've resisted reviewing plays that have been streamed online. One of the reasons I enjoy theatre so much is the visceral sense of occupying the same space as the performer, which vanishes when you're experiencing a show on video.

While NoMad's minimalist staging and soundscape probably work quite well when you're physically present in the audience, it doesn't on video. And, putting my technical hat on for a moment, especially not on incredibly low bit-rate video that constantly stutters, judders and freezes, and where the sound breaks mid-way through (thank God for automated YouTube subtitling).

But it's a testament to the quality of the show that it hits as hard as it does even with one hand tied behind its back. Watching NoMad made me positively itch to get back into a theatre - here's hoping 2021 sees this get a proper run as it deserves as much attention as it can get.